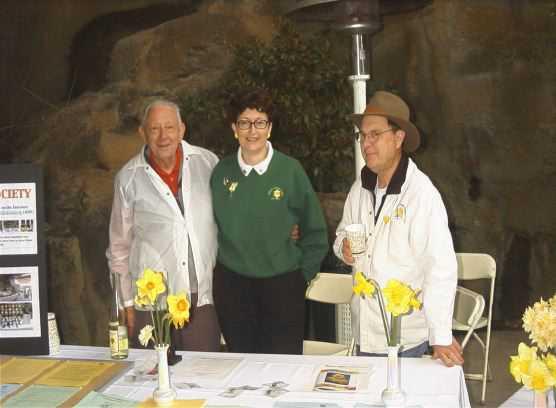 Our two Northern California Daffodil Society Shows are over and the results have been posted. However, the list of winning flowers and exhibitors doesn’t really portray the these events. There are people and happenings that will be remembered long after who won what has been forgotten. Here are some of my memories from the shows.

Seeing Kathy Leonardi again. We’ve missed her company – and flowers – over the past several years.

Realizing that Dian and Mike Keesee drive all the way from Fortuna to our shows on two successive weekends. Thanks, Keesees.

Seeing Rosemary Scholz and son John exhibiting daffodils and continuing in our activities without Bill.

Enjoying some time with Bob Darling, our Washington DC comrade.

Jan Moyers driving from San Rafael to Livermore during Friday evening rush just to help setup the show – even though she had no flowers. This is a nerve-wracking two-hour jaunt in rush-hour traffic!

Nancy and Gene Cameron’s making the two-day journey down from Portland to spend the weekend with us. Thanks Nancy and Gene – and best wishes to you!

Harold Koopowitz and Marilynn Howe driving from the Los Angeles Basin to show us the break-through miniatures they are creating. Am I glad they did.

The lovely artistic arrangements provided by the Livermore-Amador Valley Garden Club. The quality of the exhibits was exeptionally high and drew public interest.

That Jacque Baclace checked her garden and brought some blooms (“I don’t have anything”) – one of which was a superb ‘Rapture’ which won the Small-garden Grower’s Ribbon and was considered for Best in Show.

The Alden Lane Nursery staff who attended our every need – promptly!

Deep appreciation to Jackie Courtwright who, at the conclusion of the show, walked over from her office to invite us back next year. It’s nice to be wanted!

Nancy Wilson giving a “judges refresher” on Saturday. A nice service to several of our judges who are unable to travel to the ADS Convention.

A relaxing Saturday evening dinner in Livermore with our daffodil friends.

The replacement of last year’s snowstorm with this year’s rain deluge. The partly open show area was at one time a river of water. That’s an exaggeration, only a quarter-inch or so flowed across the floor. All was over before show time.

A bouquet of survivor-daffodils brought by Gale Kautz, wife of the winery CEO. These hardy flowers had endured an attempted asphalt layering by the State Department of Transportation. Sitting in their vase at the show during Friday night staging, a mighty gust of wind blew open the heavy doors and knocked the vase from the table. Stems were broken but no matter. The stems were trimmed and the blooms were transferred into a shorter vase where they sparkled throughout the show. Yes, daffodils are resilient!

Two large bouquets of what we believe is ‘Twink’ 4Y-O, an old double thought extinct. Lore Gates brings this each year from her property less than ten miles from the showplace. Planted by homesteaders a century or so ago and abandoned for half that time since, the bulbs have thrived totally without care. This was the most talked-about display in the room!

Commercial growers, I suggest you contact Lore and add ‘Twink’ to your catalog!

Rusty Rolleri’s educational exhibit on Sierra wildflowers. Yes, we need to increase the educational portion of our daffodil show.

Disappointment in missing Liz and Doug Kent, who drive from the Pacific Coast 200 miles to Murphys each year just to help us set up the Show.  Doug’s mother died shortly before the show and they had to cancel.

The incredible contributions to the Murphys show made by Melissa Reading and John Castor. They came from Livermore to help set up the show and spent nine hours there that day and evening. Wayne Steele, Kirby Fong, and I owe deep thanks to them. Without their help, many of our non-collection flowers would never have made it onto the tables. Melissa brought four blooms of Achduart (no other blooms) and won two blues plus the Small-garden Grower’s Ribbon. When is our next judging school? She is ready.

The hanging-from-the-rafters decorations in the showroom – hanging daffodil banners and a daffodil kite! The brainstorm and effort of the Ironstone Vineyards staff.

Larry Ringland’s fine vases of show daffodils in the upper-level Ironstone Vineyards display. We had to twist his arm to get him to enter three in the show. Swept the ribbons in the class, of course. Larry and his KIV landscape staff are masters at growing daffodils in containers. They manage to have a hundred half-barrels of different cultivars in full bloom for the weekend Festival! This in addition to planting and maintaining vast areas of naturalized daffodils on the roadsides and property.

The continuing help from KIV’s Miles Griffin and Larry Ringland – and their staffs. Tables were setup and dressed when we arrived. Each KIV person was around whenever help was needed and ensured we got what we needed. At the conclusion of the show, magically, assistance in the form of young, strong bodies arrived to help us take down the show.

Our enthusiastic Murphys grower, Janet Wood, who progressed from last year’s blue-ribbon three-stem entry of ‘Carleton’, to this year’s blue-ribbon entry of ‘Appalachian Star’. (Yes, Janet, we’ve tardily identified the old-timer growing in your yard as barrii conspicuus.) Janet is a Murphys resident who read about the show last year and promptly went out to her yard to see what was blooming. Her interest in daffodils has blossomed with the bulbs she got at the NCDS Fall Party.

The thrill of seeing Jane Hunt’s painting in the juried art competition in the Festival. Rich and Jane won the Bozievich Ribbon in our show, but the real honor was Jane’s upstairs. Her painting of daffodils was accepted for the competition – a prestigious event. While we toiled with our entries Friday night and ate sandwiches, Jane and Rich attended the reception upstairs for artists!

Welcoming Jay and Faye Pengra from Southern California back into daffodils.  Jay was a major grower and exhibitor in the now-defunct Southern California Daffodil Society. They took time out to raise two girls (eg, teen-age soccer games on Saturday instead of daffodil shows). Jay recognized the ex-SCDS show properties we use at Murphys: he and his dad made most of them!

The Ironstone Vineyards providing a hearty lunch on Saturday to all show workers and judges. Their outdoor barbecue was my choice – and a good choice it was! KIV also provided a bottle of wine to each ADS Ribbon winner!

The competence of the relatively small crew of Judges who faced the task of judging a 900-bloom show. Those who had entries in a class smoothly switched to another team. Teams were fluid, but effective. Thanks, judges!

The camaraderie of all NCDS members attending the show. We had a great weekend together – including a good Saturday night dinner. (After a glass of wine, the stress went away!)

Wishing the best to all,